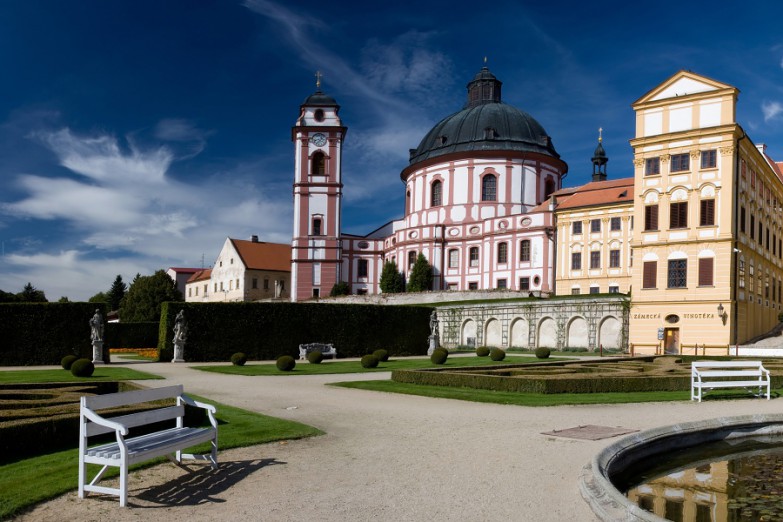 Jaroměřice nad Rokytnou is a small town in Southwest Moravia, located 13 km from Třebíč. At present, there are 4 260 inhabitants. The origins of the city´s emblem are connected with the shooting of a particularly massive deer at a place where the city was founded. An old successful hunter was Prince Jaromír of the Přemyslid dynasty. The town hall still preserves an extraordinary sixteen-point-antler buck.

The dominant feature of the town is the baroque chateau complex, which includes the Church of St. Margaret and the chateau garden, situated on both banks of the river Rokytná. The historic centre is an urban conservation area. The Museum of Otokar Březina, the poet who lived and worked here, is also open to the public. The surrounding countryside is mostly part of the Jaroměřice basin and the rest of the area to the Znojmo uplands with an altitude of 400-500 m. The valley of the river Rokytná towards the village of Přístpo is a natural park that attracts trips and walks. The tempting destination is the rock of Justýnka, surrounded with an old legend from the times of Turkish invasions of Moravia. The town is rich not only in its cultural heritage. Since 1999 it has been famous for Petr Dvorský International Music Festival. Tourist Attractions: Jaroměřice nad Rokytnou Chateau and Church of St. Margaret, Museum of Otokar Březina, Nature trail in Jaroměřice nad Rokytnou. Contact to the information centre - here»» Official website of the town: www.jaromericenr.cz